the zeros before
HomeFoodWhat is the difference between roti, naan and paratha?
Food

What is the difference between roti, naan and paratha? 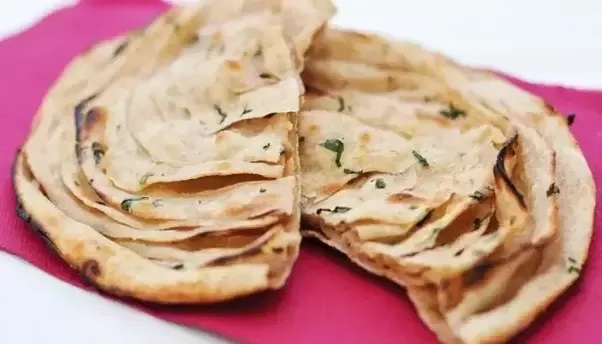 Roti, naan and paratha are all indigenous to North India. Ofcourse, they have rice too but nothing like peeling off bread and dipping it in a luscious sauce! What’s more? Roti is also incredibly light and healthy.

Now let’s find out the differences between these three basic Indian flatbreads.

Naan: You may know this as an asymmetrical piece of white bread that’s popularly served with Mughlai dishes. This is one of the dishes that the Tandoori cooking caters to. Its been a long established process to cook this dish in a cylindrical clay oven that is usually fired with charcoal. The bread is placed on the side of the oven with the use of bare hands. This is made with white flour and employs the use of leavening agents like baking powder and baking soda which helps in the ballooning of the bread. It is then smothered with butter, optionally garlic and cilantro. Naan is not exactly healthy, taking into account the use of white flour but the side-dishes that it’s paired with is high in nutritional value, like Palak panner and Dhal makhani.

Roti or chapati: Roti and chapati are both unleavened breads. They are a lot thinner than naan and follow a simple procedure of cooking it on the tawa. There is a slight departure in the method of cooking the two. Chapati is plainly fried on the griddle while roti is cooked for a few seconds on the tawa and then directly transferred to the fire where it puffs up.

Also, roti has many varieties. For instance, tandoori roti is a lot thicker and cooked in an archaic oven. Roomali roti is much thinner and folded like a handkerchief while serving. Since the roti is so fine, it is also used as a wrap for kebabs. Missi rotis is another variation that is made with wheat flour, chickpea flour and corn flour. Sheermaal is yet another flat bread that is made with saffron. It is sweetish in taste and has its roots in Iran but was later introduced to North India by the Mughal emperors along with dishes like Naan, kulcha and rumali.

Paratha: Paratha is a much thicker kind of unleavened bread. Paratha can either be stuffed with a variety of veggies or even be eaten as a standalone dish. This kind of dough is kneaded, flattened, folded and rolled over and over again like a puff pastry, thus creating layers.

About a decade ago, an Indian origin couple based in California came up with the groundbreaking idea of manufacturing a machine that would make roti from scratch and called this Rotimatic. The company sold about 40,000 machines and is today a roaring multi-million dollar commercial enterprise. Rotimatic reviews branded it as the world’s most expensive bread maker. Now procurable in seven markets, this smart machine has been making waves ever since.

Expert tips on how to buy a sweater?

WELCOME TO THE GAMBLING INDUSTRY OF KNOWLEDGE HUB!!

AR-10: the perfect rifle for the enhanced support