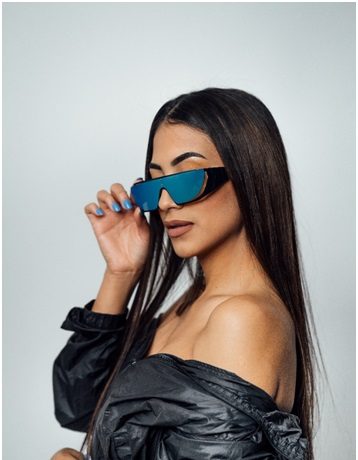 In a few months, everyone’s favourite bubbly and funny girl, Alyson Hannigan, will give birth to her second child with husband, Alexis Denisof. But in the meantime, she’s making sure that she makes the most with her two-year old little girl, Satyana. Recently, the happy family was seen laughing and enjoying quality time as the parents cheered on Satyana while the little girl tried her best to climb up colourful ladders and frames at the Brentwood, California playground.

The How I Met Your Mother star wore a casual ensemble to make her comfortable. With stretchable jeans, loose peasant top, and boots, she moved around comfortably chasing her little girl. She accessorized her outfit with oval sunglasses that framed her face beautifully.

Lady Gaga is the style goddess of this generation. Everywhere she goes, people look over not just to get a glimpse of the singer in person but also to check out her outfits. Aside from the Avant Garde dresses that she’s well-known for, she also rocks a couple of equally unique and yes, out-of-this-world brands of sunglasses.

Before, she’s been spotted wearing the baroque collection from Prada. All pieces in the collection were loud and colourful – which is what’s expected from La Gaga. Some of her favourite brands of sunglasses also include Chanel and a couple of independent designers who are said to even customize designs exclusively for her.

Recently, she arrived in Japan in a gothic ensemble – all black and a pair of round vintage sunglasses. Another one of her favourite independent brands of sunglasses? Maybe. We just have three words for her – SHE ROCKED IT (again)!

Her sisters are controversial and now that she’s all grown up, Kendall Jenner, is starting to share the controversial limelight with them. Recently, the equally famous Jenner sisters, Kendall and Kylie, were criticized for dressing up a little too mature for their age. But this week, Kendall was seen in Calabasas wearing an outfit that’s just right for a 16-year-old. She wore a pair of cute pink sweat shirt matched with huge Tom Ford Sunglasses. The younger breed of the Kardashians was having lunch with friends at the Blue Table gourmet deli. The aviator sunglasses pumped up the sophistication in her laidback outfit. It made her look stylish and elegant in a way that’s just right for a 16-year-old.

How To Choose Hardwood Floors for Your Home

What Are the Different Types of Auto Insurance?

Top Ways to Keep Cost Under Control for Your Home Remodel